“Game on” for national selection

Australians siblings Nathan and Haylee Outteridge continue to show their mettle, moving into the top spot in the Nacra 17. Their national teammates, Jason Waterhouse and Lisa Darmanin (AUS), are also vying for a country spot for Tokyo 2020 and closing in at this world championship, now third overall.

Sandwiched between the two country contenders are the Brits, John Gimson and Anna Burnet.

“Our aim was to continue our form from earlier in the week. We are targeting top eights around the first top mark and working forward from there. All the training we’ve been doing is starting to pay off. We are feeling really comfortable and happy it’s all coming together,” Nathan Outteridge, Olympic 49er gold medallist and America’s Cup sailor said on the beach at Geelong after racing.

Rio 2016 silver medallists Waterhouse and Darmanin have edged closer to their teammates but remain separated from them by a whole bunch of points. “We had a better day than yesterday – we were starting better and making smarter decisions. We had a little issue with one of our fellow countrymen tacking on top of us too closely. They have shown their cards and I think we can expect a good game in the next couple of days. Gloves are off, let’s do this,” Darmanin said. 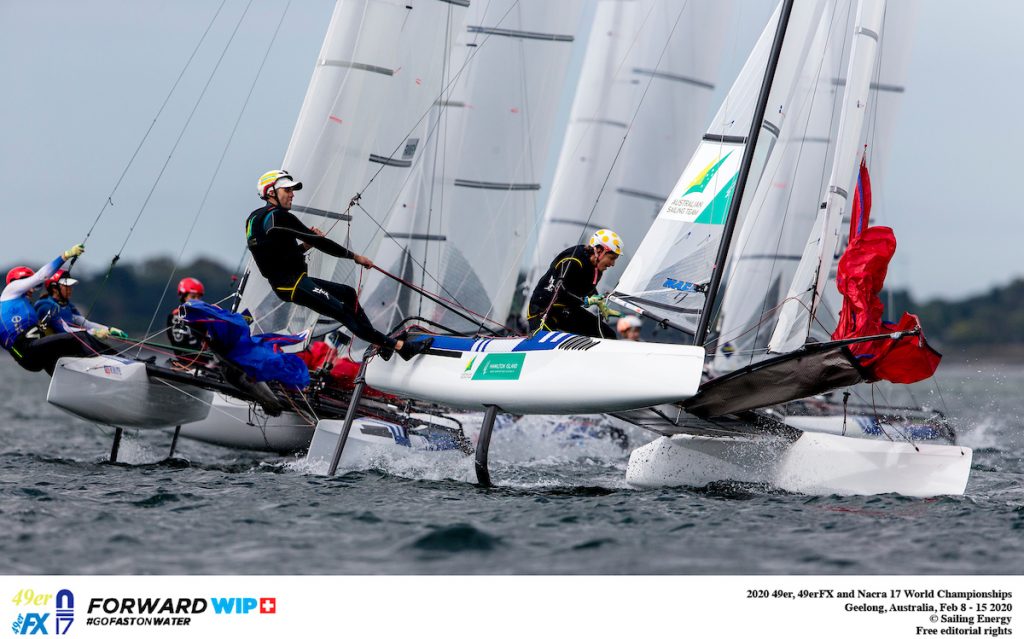 Italian selectors are in a similar position to the Australians, two worthy teams – current world champions Vittoria Bissaro and Maelle Frascari and the 2018 world and European champions Ruggero Tita and Caterina Banti – hoping to impress.

So far it’s Bissaro and Frascari who have this regatta, fourth versus 17th with two days of racing remaining. Tita/Banti were having a fantastic penultimate race of the day, in the lead around the leeward marks until they suffered a mechanical issue. They were forced to limp around the course for the final lap, finishing 12th while Bissaro/Frascari were back in 25th. It was yet another challenge for Tita/Banti, who are dozens of points behind their teammates in this critical selection battle. 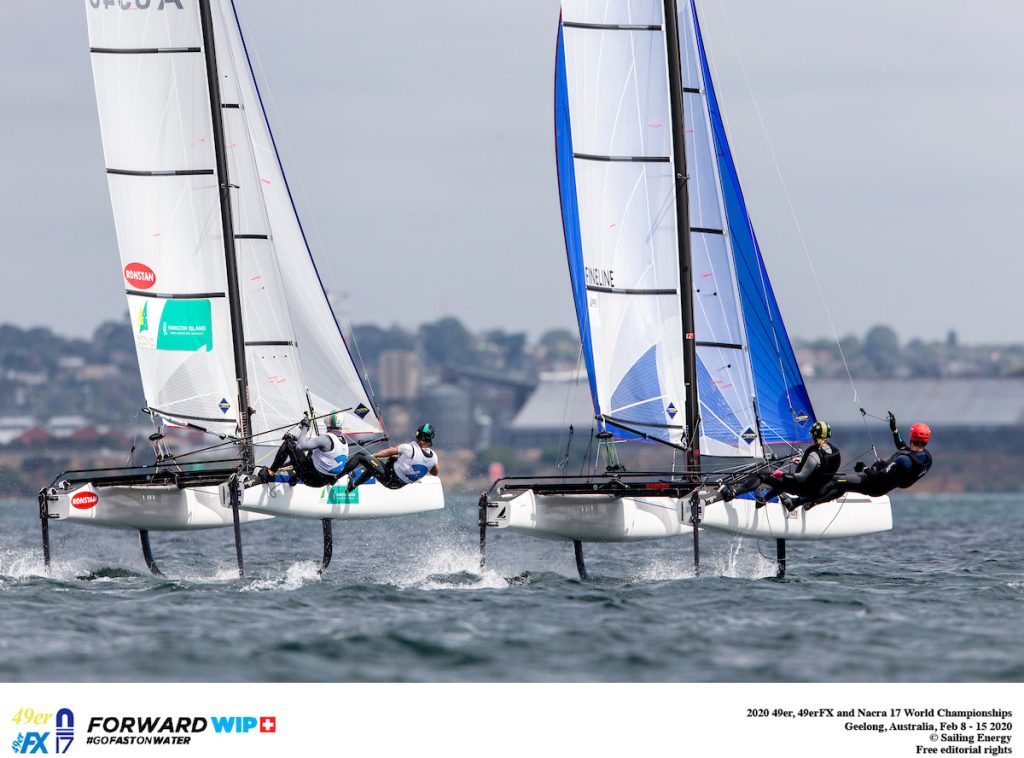 Second by two points in the 49erFX is Spain’s Tamara Echegoyen, the 2016 World Champion and Rio 2016 Olympian with a different crew, and Paula Barcelo. The duo sailed through injury at the 2019 worlds and suffered, only managing a silver fleet finish. With the pressure of the Spanish trials on, these champions are in contention for the lead and are looking to give the Spanish selectors a hard choice.

“It’s important [being a world championship] but we have to think more than this,” Echegoyen said after racing. “It’s really good training with the best teams looking for the next Olympics. We need to do a good championship, it gives us confidence in our work and for sure we will fight every day. We just go to the water, do our race and try to learn from our mistakes. And have fun.”

In a similar situation is Anne-Julie Schutt and Iben Nielsby (DEN). They are in a tight domestic selection fight for the second straight Olympiad, and continue to sail at the highest level.

With a one point lead in the 49erFX are Charlotte Dobson and Saskia Tidey (GBR). Dobson said, “We had a really good day. We keep finding some space and manging to be fast enough to end up with three top threes. I don’t know what we are doing right to be honest.” 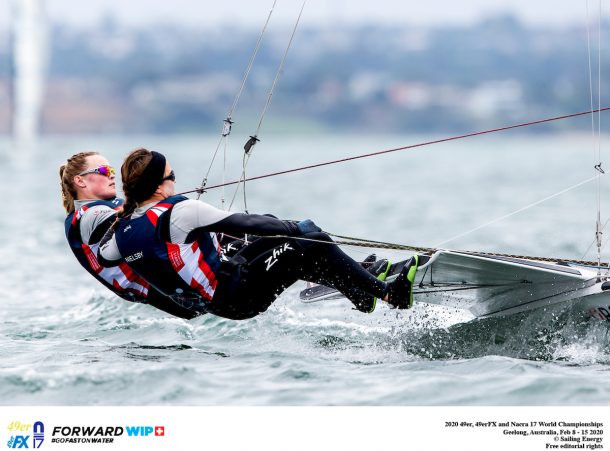 Gold fleet racing kicked off at the 49er, 49erFX and Nacra 17 2020 World Championship in Australia, a benchmark regatta for those countries still to select their representatives for the Tokyo 2020 Olympic Games.

Five-time 49er world champions Peter Burling and Blair Tuke from New Zealand have fallen to second in the men’s skiff competition by two points, the Austrians Benjamin Bildstein and David Hussl the new number ones, two days from the final finish line.

The excitement level was low-key in the Austrian camp afterwards: “After today we have mixed feelings, the first two races we had very good sailing… really good rhythm with the wind, then with the new system the next two races were really hard. At this venue if you play the wind right you are in the front, if you don’t get it you are at the back. It’s pretty hard to get it right,” Bildstein said. 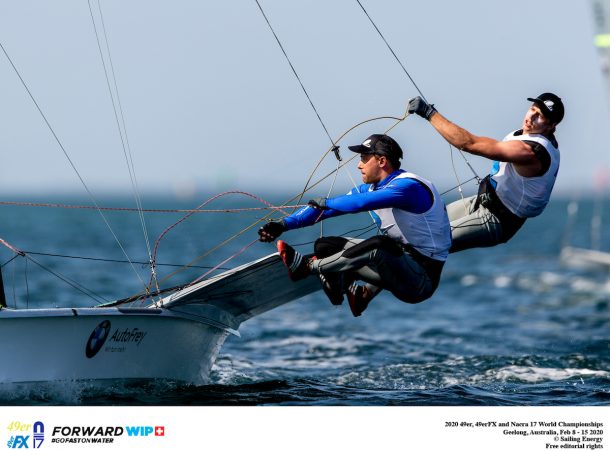 The consistent Spanish pairing of Diego Botin and Iago Lopez Marra shrugged off a penalty in the pre-start and that dropped scored of 23in the closing race to be sitting in third. “We have a really good training group and we are making good gains,” said Botin.

Two days remain before the 2020 World Champions in all three classes reveal themselves – and country selectors are watching. Nations like Italy, Australia and New Zealand have to keep the mindset of their sailors strong and the team cooperating, while at the same time scrutinizing each and every result at this last major championship prior to the Olympic Games. Battles are getting heated. 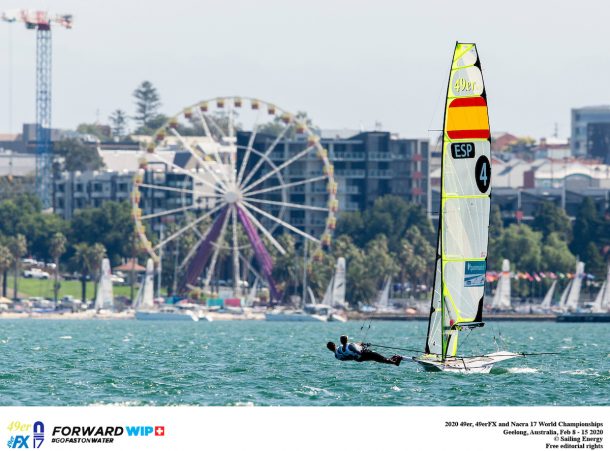