Two final races in glorious sun and moderate breeze completed the six race Dragon Gold Cup 2021 by Yanmar in Marstrand. The regatta ended on high drama when no less than five of the top ten boats were disqualified under black flag in the penultimate race, throwing the overall results wide open. Those on the wrong side of the line included Dirk Pramann, Dmitry Samokhin, Andy Beadsworth, Torvar Mirsky and Jens Christensen, who had gone into the day 2nd, 4th, 5th, 6th and 8th respectively.

For overnight leader Pieter Heerema the sight of so many close challengers pulling out must have been a welcome relief. But with no discard in the Gold Cup there was still a lot of racing between him and victory so it was immediately back to the business in hand. Once again this hugely experienced team, which includes past Gold Cup and Double European Championship winning helm Lars Hendriksen and Ukrainian double 49er Olympian and past Gold Cup winning crew George Leonchuk, sailed fast and smart to finish second behind Anatoly Loginov in RUS27. Loginov had been black flagged in the first race of the series so despite this being his third race win he had no realistic chance of making the podium and was sailing purely for the joy of it. Crossing the line in third came Belgium’s Benjamin Morgen, with Demark’s Frank Berg fourth and young Australian 49er sailor David Gilmour, helming for the Japanese YRed team in father Peter’s absence, fifth. 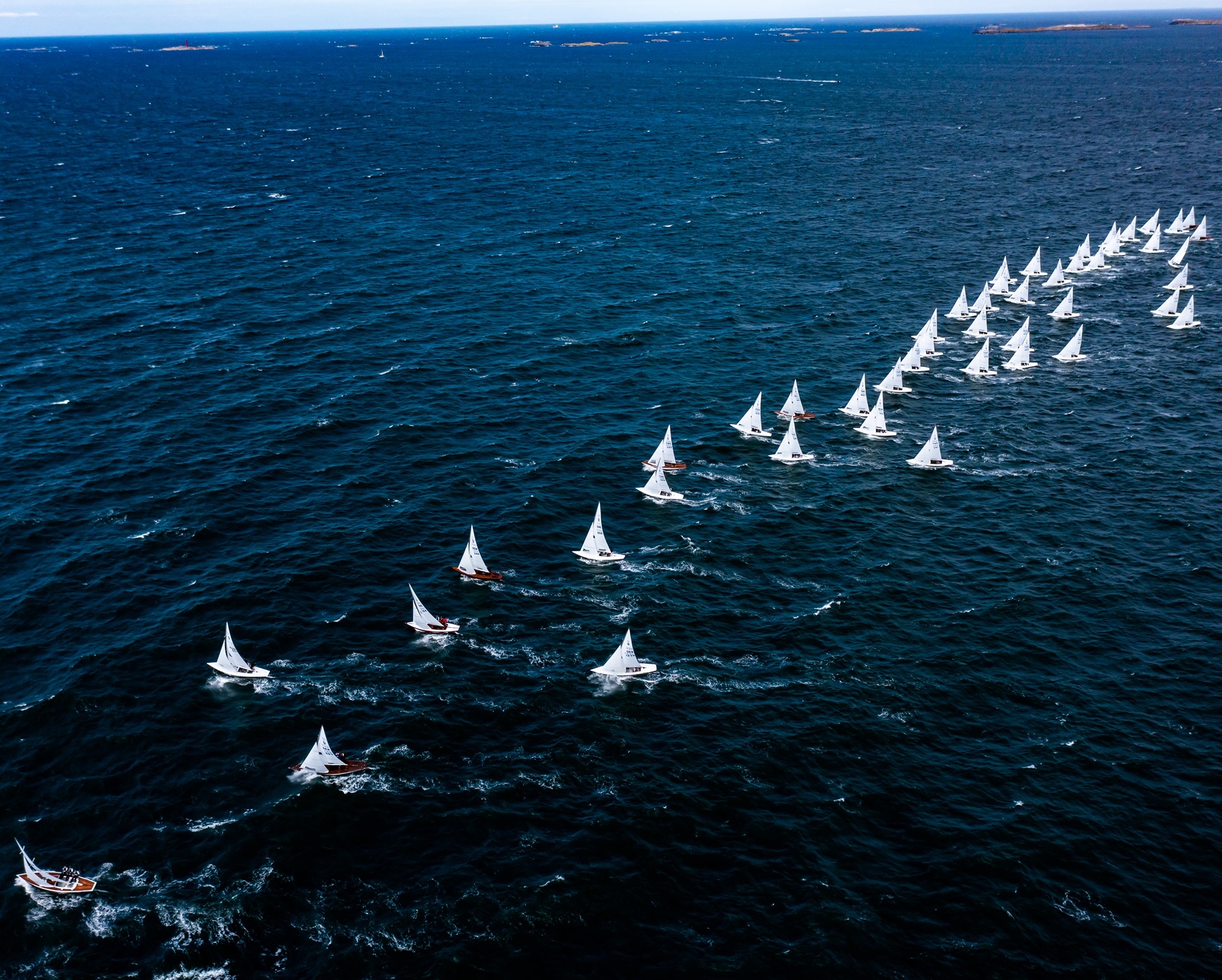 Going into the final race Heerema and his team had a sixteen point delta on nearest rival Pedro Andrade so their focus was on starting cleanly and staying out of trouble. Andrade got a great start at the committee boat end, tacked right straight away and went on to lead the race comfortably all the way to the finish. Behind him a chasing pack soon broke off the front of the fleet and a tight battle ensued between Andy Beadsworth, Magnus Holmberg, Dmitry Samokhin, David Gilmour and Pieter Heerema. Despite winning the race in spectacular style Andrade knew his reign as Dragon Gold Cup Champion had come to an end as Heerema crossed the line in fourth behind Beadsworth and Samokhin. Holmberg took fifth and Sweden’s Martin Pålsson sixth.

This will be a particularly sweet victory for Pieter Heerema who has spent some 30 years trying to win the Gold Cup and had developed something of a bridesmaid’s reputation having made the lower slopes of the podium in 2013, 2018 and 2019, but never quite made it to the top step. But Heerema, a Vende Globe Race veteran, is not a man to give in easily and that determination has finally paid off. After the prize giving an elated Pieter Heerema summed up his feelings saying, ”I’ve tried to win this thing a lot of times and I’ve been several times second, third and fourth, but finally it works!” 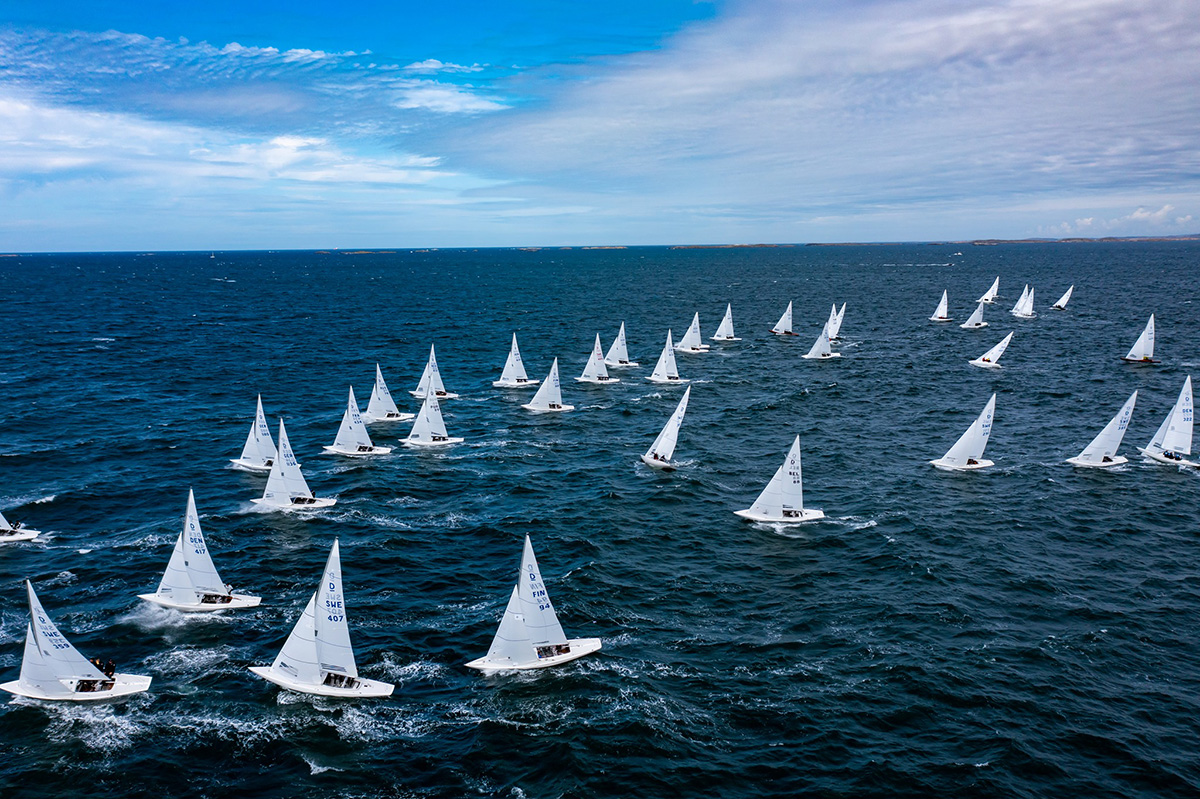 For Martin Pålsson his sixth place in the final race moved him up to fourth in the overall standings and confirmed him and his crew of Peter Lindh, Thomas Wallenfeldt and Gustav Gärdebäck as the 2021 Dragon Gold Cup Corinthian Champions. Second in the Corinthian Division was Denmark’s Frank Berg with Germany’s Benjamin Morgen third.

The Dragon Gold Cup also features a special competition for national teams called the Nations Cup. Three boat teams for each nation are selected based on their finishing position in the opening race of the series. The winners of the 2021 Nations Cup are the Russian team of RUS76 Rocknrolla (Dmitry Samokhin), RUS35 Sunflower (Viktor Fogelson) and RUS27 Annapurna (Anatoly Loginov). The deed of gift states that the trophy shall be held by the helmsman of the team member with the highest overall placing and so the Nations Cup will be returning to Russia with Dmitry Samokhin.

The Dragon Silver Cup was presented to the class by Jacob Roosen of Dragon NED380. By profession Jacob is a specialist dealer in European silver and the trophy is a Swedish silver cup manufacturer by C G Hallbers in Stockholm in 1917. Wishing to create something exceptional, Jacob commissioned renowned Dutch/Argentinian artist Diana Roig to paint a design onto the cup that would convey the excitement and vibrancy of the world of Dragon sailing. The finished piece is an extraordinary and striking piece. It is awarded to the team that finishes half way up the overall rankings or to the winner of the Silver fleet if the fleet is split. This year’s winner is France’s Jean-Pierre Barjon sailing FRA434 Taki Taki with Patrick Aaucour, Jean pierre Barjon and Benjamin Enon.

At the prize giving held outside the island’s famous Societetshuset community hall the sailors were able to not only salute the victors, but also say thank you to the people of Marstrand, to the staff and members of the Marstrand’s Segelsällskap, the Göteborgs Kungliga Segelsällskap and the Swedish Dragon Class, to the Race Officer Mattias Dahlström and his team and to the event sponsors Yanmar and the many supporting sponsors and suppliers who helped make the event possible.

As the sun finally set on the Dragon Gold Cup 2021 by Yanmar Martin Pålsson summarised the event beautifully saying, ”First Marstrand showed its bad side, I’ve never seen so many day’s ashore here in my whole life, but finally we got three days with super sailing and we got all the races in and they were full length races. The Race Officers and everybody have done a tremendous job, the social life has been well organised and fun despite the COVID-19 restrictions and everything has been great. We’ve seen some impressive sailing from some young new crews and we’ve seen the Corinthian teams getting great results overall too.”

The 2022 Dragon Gold Cup will take place in Ostend, Belgium from 21 to 26 August, while the next major event in the International Dragon calendar will be the Italian Grand Prix and the Dragon European Grand Prix Finals in Sanremo, Italy from 26 to 31 October 2021.
Overall Top Ten

Further details about the event can be found at www.goldcup21.com.